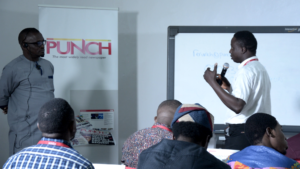 Participants, comprising editorial and non-editorial staff, who recently joined PUNCH Nigeria Limited, were welcomed to the orientation by the Head Programmes, PUNCH Media Foundation, Ms Rebecca Erureh, who took the time to acknowledge the management of PUNCH Nigeria Limited for organising the training. She also touched on the purpose of the immersion training in general, and the orientation in particular. Thereafter, she invited the Chairman of the Editorial Board, Mr Biodun Sonowo to take the first session of the orientation.

In his address, Chairman, Editorial Board took participants through the history of PUNCH Newspapers in brief pointing out that the organisation has thrived for over 50 years, having been established on August 8, 1970, thus, making the Newspaper the surviving second oldest newspaper in the country apart from other hard-earned accolades it has gotten over the years, like, the Nigeria’s newspaper of record and the most widely read national daily.

Editor, The PUNCH, Mr Adedayo Oketola, while addressing the participants, noted that they needed to be conscious of the fact that they are intellectually sound and that was why PUNCH offered them the platform to express their skills as well as develop it. He added that PUNCH provides one of the best platforms to practice journalism in Nigeria, as it gives its team members, particularly the fresh hands, the springboard to kick-start a career in journalism.

Mr Oketola stated that PUNCH Newspapers is unique in many ways. He noted that the design of PUNCH Newspapers is arguably second to none in the country, while the tabloid and semi-tabloid nature of SATURDAY and SUNDAY PUNCH and the business-like nature of The PUNCH make the newspapers stand out among other national dailies. He also mentioned the quality of the editorial staff of PUNCH Newspapers whose works have won all named awards in journalism, both in Nigeria and Africa at large, is another edge PUNCH has over other print media in Nigeria.

In conclusion, he charged participants, the majority of whom are editorial staff, to work hard, do the extra, ensure they meet deadline, stay consistent, and dream big.

Reacting to the presentation by the Editor, The PUNCH, Anthony, one of the participants confirmed that PUNCH Newspapers is a leading light to other print media houses in Nigeria. He said this based on reports on the metrics of media houses in Nigeria that he was following.  Peter, another participant, requested to know the time that was most challenging for Mr Oketola when he newly joined The PUNCH.

He reacted by noting that, he set a high standard for himself when he started out, so, he did not really experience any challenging time. He, However, mentioned a year when the PUNCH won few awards at an NMMA outing. He noted that when he returned, he set a personal target to write three award-winning reports the following year. He did as planned, and one of the stories won about four different awards the following year. He challenged participants to make themselves valuable as no employer pays the employer for their time or dress sense, but for the value they bring to the table.